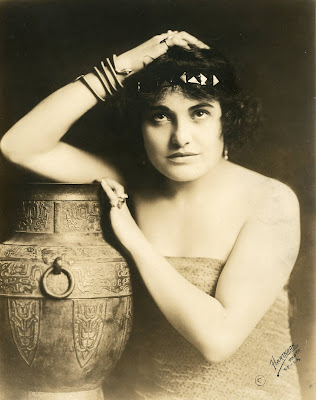 Silent film actress Lucille Young was born on this day.  There is every reason to believe that Lucille Young was indeed her birth name and that she was born in Lansing, Michigan. I say this because several sources claim that her birth name was Lucia Medina and that she was born in Lyon in the east of France. There is no evidence this is the case. For one thing, we known more about her parents than we do many early film players, as she lived with her mother in Los Angeles while she was working in films there. Secondly, we have the name and birth places of her siblings, including one (a half-sister) that also worked in the film industry. I don't know how the other information came to be associated with her...maybe it was the result of a part of her life that we are not very familiar with...a stage name perhaps?? Perhaps this is a mistake of conflation with another person entirely?? In any case, Lucille Young the Michigan born actress, we know got her start on the stage in Detroit.  She in fact acted with her sister there in vaudeville revues.  Sometime during or before 1909, she relocated to New York,  presumably specifically to get into film work. She made her film debut the next year An Indian's Gratitude, a Pathé Frères production directed by James Young Deer. She is most closely associated with Thanhouser films of the era, with her very next film, The Vicar of Wakefield (1910), marking her first film with them.  She did not stay there long, however, and by 1911 she was working at IMP, getting direction from George Loane Tucker, Thomas Ince, and Joseph W. Smiley, who directed the bulk of her film appearance at the studio. Several of these films featured King Baggot in the male lead and in 1912, she had a supporting role in the Mary Pickford melodrama A Timely Repentance. She spent time working at both Kalem and Nestor Films in 1913, before winding up at Majestic in early 1914.  She then worked for a few films at Biograph at the end of that year. But, 1915 would turn out to be her most prolific year of acting, when she appeared in nearly 20 films, among them two early Tod Browning efforts in The Spell of the Poppy and The Woman from Warren's. Up to this point in her career, she had acted only in shorts, but in 1916 that would change when she was cast in the Lillian Gish feature Daphne and the Pirate, written by D.W. Griffith under one his pen names of "Granville Warwick."  (In 1918 she was directed by Griffith in The Greatest Thing in Life in a tiny role, again starring Gish.) From then on, she acted mostly in features, with the odd short sprinkled among them.  In all of these, she was perpetually cast in a supporting roles only, never the lead (seems that old saying about bride's maids & the bride fits nicely here). She appeared in only five films in the entire decade of the 1920's, several of them Tom Mix vehicles. Her last silent film was Desert Greed starring Yakima Canutt and Rose Blossom and released in September of 1926; produced by Canutt's own company, it was, naturally, a western.  She appeared in just one film in 1930, the Will Rogers comedy Lightnin' produced by Fox. It was the only film with sound in which she acted, but considering that her role was so small as to go without a credit, she didn't much of a speaking role. By this time Young was living in Tinseltown and she stayed in California when she decided to end her acting career. She passed away there on the 2nd of August following surgery which developed complications. She was just 51 years old. Her obituary states that she was cremated after a small private funeral, par her wishes.

Posted by Semetra Rhodes at 8:46 PM