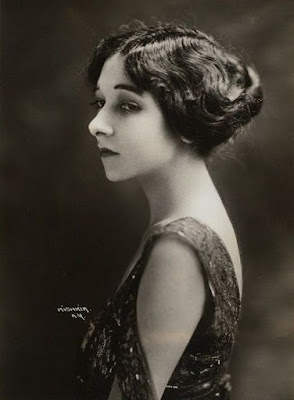 Russian born actress Fania Marinoff was born on this day in Odessa, Russian Empire (now located in the independent country of Ukraine).  Born into a Jewish family, she wound up being the baby of a family that included 12 siblings. She was the youngest due to her mother's death not long after her birth. At the age of just six, she was was literally smuggled into the United States and was meant to live with relatives upon arrival in Boston. She did not have an easy time of it. No one seems to know where she was living for her first two years in America, but she was frequently on the streets and she later said that she was without food a good deal of the time and without education all of the time. At the age of eight she was sent to live with an older brother who was either already living in the country or who had recently arrived. The situation was meant to improve things for her, but they only got worse. Much worse. Her brother and wife wife badly abused her both physically and mentally; she was held against her will and only frequently fed. Acting would eventually be a way out for her. Her stage debut came when she was either nine or ten; she was cast in the role of a young boy in the play Cyrano de Bergerac.  She is known to have made her Broadway debut in 1903 at the age of just 13.  Most of her career was spent on the stage, but she did appear in a small number of films between 1914 and 1918.  By the time she made her film debut in the early Famous Players production One of Our Girls (June 1914), she was already a star on the New York stage. In total, she only had ten film credits, and three of those were shorts.  Her second film, though one of those shorts, saw her in a starring role for the first time; The Lure of Mammon (May 1915) was a short melodrama made by Kalem that ironically featured a young girl in a boat bound for America. Six of her film appearances were in the year 1915, the last of which--Nedra (November 1915)--found her finally in the female lead in a feature. She appeared in just three more films, two in 1916 and her final film, The Rise of Jenny Cushing, a Maurice Tourneur feature, in 1917.  Like so many successful actors of the stage, Marinoff found silent film work stilting and so she went permanently back to the stage. In 1937 it appeared that she had retired from the stage for good, but she came back after a multi-year hiatus; she would later reveal in an interview that heavy drinking as a coping mechanism for the abuse she suffered as a child was responsible for her long absence. She did make a successful come back in the the 1940's and stayed in a heavy work rotation through 1945. She then retired for good, but stayed intimately involved in the arts. At the time of her retirement she had been on the stage acting, singing and dancing for fifty years.  In 1914 Marinoff had wed writer and artist Carl Van Vechten; so when her career on the stage ended, the pair became a fixture in the New York art community.  Van Vechten passed away in 1964 and she gradually retired from public life. She passed away herself in Englewood, New Jersey at the age of 81 on the 17th of November.  Her burial is currently unknown.

Email ThisBlogThis!Share to TwitterShare to FacebookShare to Pinterest
Labels: Born Today, Fania Marinoff, Nedra (1915), One Of Our Girls (1914), The Lure Of Mammon (1915), The Rise Of Jenny Cushing (1917)