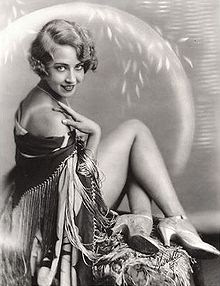 When Doris Eaton Travis passed away in 2010, she was the last living Ziegfeld Girl, and by far the longest lived! Born Doris Eaton on this day in Norfolk, Virginia, she began dance lessons at the age of four in Washington D.C. The entire family was involved with stage performance, and along with her siblings, they formed a group referred to as "The Seven Little Eatons."  At just the age of seven, she--along with two of her older sisters--were cast in a major play in Washington, thus making her professional acting debut before the age of ten (considering that she performed up to just one month before her death, that means professional performance career lasted for a whopping 99 years...that HAS got to be some kind of record!).  Throughout 1910's, Eaton continued to appear in stage performances with her siblings, mostly older sisters Pearl and Mary, until she was hired by the Ziegfeld Follies in 1918.  She was so young, that she appeared under a series of stage names to skirt child labor laws (yes, they had them even then...).  Though she had a long career in stage performance, mostly in dance, she did not have a terribly long career in films; and what she did have was mostly confined to the 1920's. But, still, when she debuted in film, she was not yet twenty.   At the age of just seventeen, she was cast as Betty in the Christy Cabanne written and directed showgirl drama At the Stage Door in 1921. She next appeared in three features in 1922, each by a different studio. The first of them was most definitely the high profile. The Broadway Peacock was a Fox melodrama directed by Charles Brabin and starring Pearl White; as young as she was, she had a named supporting role in the film. Next, the Donald Crisp directed Tell Your Children may not have been an A-list production, but Eaton did have the starring role; made for British Paramount in the UK, it featured an almost entirely British cast aside from Eaton and Gertrude McCoy (it was also another early twenties film to have Alfred Hitchcock as an art director). That same year, she also appeared in the UK production The Call of the East, appearing again with British actor Warwick Ward, who was also in Tell Your Children. She only appeared in two shorts the following year, both of which were associated with the Gorham Follies, the revue owned by her husband of only six months Joe Gorham: High Kickers and Fashion Follies; both were produced by Century Film for Universal (her marriage to Gorham was ended by his sudden death). It is understandable that a young woman as talented as she was in song and dance, that film acting would not appeal in the silent era; and she did not appear again in a feature until the coming of sound (she did have a role in the Mike and Ike two-reeler Taking the Count in 1928). In 1929 she had small part in the early RKO full sound film Street Girl. Later in the year, she was given a named role in another RKO talkie The Very Idea (September 1929), a comedy farce based on a play.  It was her last film of the decade and her last named role in a film until 1999!  She did have tiny role in the 1930 Eddie Cantor film Whoopee!, but film work was not at all to her liking. She was not persuaded again to appear in front of the camera until agreed to the role of Eleanor Gould in the Jim Carrey film Man on the Moon about legendary comedian Andy Kaufman.  She was 95 years young at the time! She would eventually become a MAJOR figure at the Arthur Murray Dance Studios, a line of work that she was in until 1968.  She and her second husband moved to Oklahoma and established a very successful horse ranch, that was largely in the boarding business.  Additionally, she had a number of degrees, one of which she earned when she was 88. At the time of her death at the age of 106 (just a month after a performance no less!), she had been living in Michigan. She is interred there in the Guardian Angel Cemetery located in Rochester. Her brother Charles is also interred there. On the evening of the 12th of May, one day after her death on the 11th, the lights of Broadway in New York were dimmed in her honor.

Posted by Semetra Rhodes at 8:52 PM