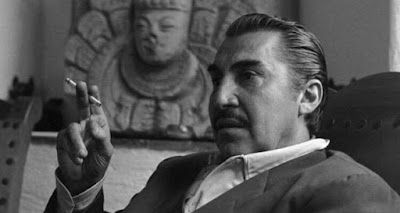 Emilio Fernández was a man of all trades in the film industry; not just an actor, not just a director...not even just the model for the Oscar statute. He was born Emilio Fernández Romo on this day in Hondo, Mexico (located in Coahuila). He was born during unrest in his native land, and the country would slide into revolution; his father would be a general in that conflict. His mother was a Kickapoo, an Algonquin speaking tribe that was severely displaced from their native range near the Great Lakes to northern Mexico, Texas, Oklahoma and Kansas. He entered films in the Los Angeles area after fleeing his native Mexico. As a teenager, he joined with the Revolution, which eventually lead to his capture, trial and imprisonment; after escape he fled to Chicago (an area very close to the original lands of the Kickapoo people). He made his way to Los Angeles where he worked in just about every profession imaginable from the docks to the restaurant industry.  He also worked in construction, which lead him into the set building arena for Hollywood studios; already interested in film making before ever leaving Mexico, the job would prove fateful for his life.  He had a number of jobs as a double in various films that have gone uncredited (as has his set work), but he formally entered the world of pictures as a rather ambivalent actor in 1928 in the little Mexican production El destino directed by Chihuahua director Chano Urueta (the two would act in Sam Peckinpah's The Wild Bunch much later on, amongst other projects). The film was his only formal credit in a silent film.  The 1930's would be his most formative decade as an emerging film maker plying his trade as an actor in Hollywood, and after 1933, back in Mexico; though he would not make his directing debut until 1942. He did, however, start writing screenplays in the 1930's and he had one gig as an assistant director in 1938.  Fernández's career was a long and very important one, both in and out of Mexico; a very talented filmmaker, he was a brash personality both in front of and behind the camera. In 1979, he directed his last two films; Erótica was his last, he both wrote and directed the thriller, which was filmed in Colima and released August. It was a remake of one of his own films, the 1953 award winning La Red (Rossana). It may have been his last directing project, but he continued acting off and on up until the time of his death. His last film appearance came in the Mexican musical Arriba Michoacán (1987), which was released a year after his death.  Fenández died suddenly on the 6th of August in 1986 in Mexico City; he was 82 years old. He is interred a the Mausoleos del Ángel in Coyoacan, Mexico.

Posted by Semetra Rhodes at 6:13 PM