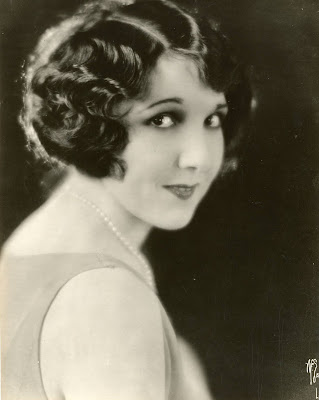 Actress, and later very successful artist, Carmelita Geraghty was born on this day in Rushville, Indiana. She may have been born in the mid-west, but she was educated on both coasts in New York and Los Angeles, where she graduated from high school. Her father Tom Geraghty was eager to get into the burgeoning motion picture industry and eventually became a prolific screenwriter (her younger brothers Gerald and Maurice followed suit).  She is the only member of the family to go into acting. She is said to have started out as an extra under a couple of different "stage names," but only records of her appearances under her birth name currently survive.  The earliest of them dates from 1923 when she got the part of Carmen Inez in the Maurice Tournuer film Jealous Husbands starring Jane Novak and Earle Williams.  She appeared in two more films that year with full credits, including Black Oxen, a bizarre romantic drama produced and directed by Frank Lloyd, starring Corrine Griffith and Conway Tearle, sporting appearance by Clara Bow. She scored her first film lead the following year in the little comedic short Trouble Brewing opposite funny-man Larry Semon with an actor then going by the name "Babe Hardy," who would later be famous as Oliver Hardy.  Following this, her first starring role in a full feature came in High Speed, her very next acting job in 1924. A Herbert Blaché film, there is no better way to describe it other than being a boxing melodrama that was actually a comedy, with Herbert Rawlinson as Hi Moreland the hapless boxer trying to win the hand of the banker's daughter Marjory played by Geraghty. The year would turn out to be her most prolific and she was announced as one of the WAMPAS Baby Stars of 1924. One of the things that she is remembered for today were her appearances in films opposite a real boxer turned actor Jack Dempsey; and she acted in no less than four films with him that year. But it probably her appearance in The Pleasure Garden in 1925 that she is still most famous for. The film was the very first completed and released picture ever directed by Alfred Hitchcock; actress Virginia Valli was at the top of the ticket, but Geraghty had second credit and her name appeared on promotional posters along with Valli. Another important performance from that same year came in the Clara Bow comedy My Lady of Whims. Again her name appeared on posters, along with fellow supporting actors Donald Keith and Lee Moran.  In 1926, she also had a supporting role in the very famously lost first film of The Great Gatsby; on the opposite end of the spectrum that year was her vamp spoof role in the Mack Sennett comedy Smith's Uncle (November 1926).  As the decade went on, she seemed to always be relegated to the supporting roles of films featuring other actresses; whether they be a Talmadge, Mary Pickford or even a Barbara Kent, she was more in the shadows than in the bright lights. By 1928, she wound up appearing in a series of Mack Sennett short comedies, for the most part in even smaller roles. She did get the lead in the 1928 "B" film South of Panama where she shared a first name with her character; but was back to the down ticket part in her very next film Object: Alimony (December 1928). In 1929, she was back to the Mack Sennett produced shorts, but it was in one of these little fluff films that she first appeared in a film with sound. The short A Close Shave was a fully mono talkie in which she starred opposite Johnny Burke. While the Pathé Exchange production Paris Bound (August 1929), her very next film, was her first role in a talking feature. She appeared in the three more features in 1929, all of them full talkies, the last of which was After the Fog, a crime intrigue starring Mary Philbin and Edmund Burns.  She was all set to have a continued regular acting career with the coming of sound pictures and the new decade; and she did have a prolific career for the first few years, but the parts, while mostly credited, were smaller and smaller. For what ever reason, her career faltered on the rocks of sound. Her last film role came in 1935 (after having been away from regular film acting for three years) in Manhattan Butterfly.  She retired completely from acting and turned to the world of visual art. She became a very successful painter and by the end of the her life had a number big exhibitions. It was a return from one of these exhibitions on the east coast that she suffered a massive heart attack at the Lombardy Hotel in New York City on the 7th of July in 1966. Her body was returned to Los Angeles and she was buried at the Hollywood Forever Cemetery; she was 65 years old. Geraghty was married to prolific writer/producer Carey Wilson from 1934 until his death in 1962.

Posted by Semetra Rhodes at 9:33 PM