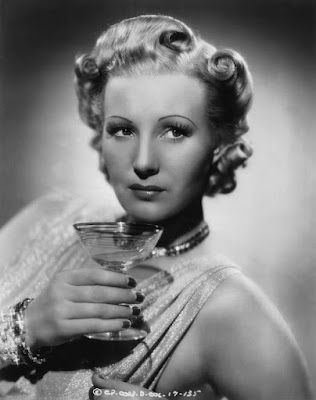 British born actress Binnie Barnes barely makes the list here, and if it were not for a little experimental film made in 1923, she would not. Binnie was born Gertrude Maud Barnes on this day in Islington (Great London), England. She had a whopping 15 siblings; the daughter of a policeman, she had a number of jobs before getting directly into show business, including nursing. It appears that a number of these jobs either contributed to her interest in acting as a career, or that she pursued as a result as that interest. In addition to working as a hostess in dance halls and similar venues, she got herself onto the stage via chorus lines when quite young. At the age of 20, she appeared in a little all sound film by Lee De Forest using his patented De Forest Phonofilm sound system. That film was simply entitled Phonofilm and dates from 1923.  She would not appear in a film again until 1931 when she had a role in the Leslie S. Hiscott (written and directed) mystery A Night in Montmartre. Barnes stayed in the British film industry until the mid 1930's, when she made the move to Hollywood; her first official American film was Universal's One Exciting Adventure in 1934. She was first billed opposite Neil Hamilton in the comedy, and though filmed at the Universal lot in California, the cast sported several British actors including Paul Cavanagh and Ferdinand Gottschalk. She would become a thoroughly American actor and, eventually, a naturalized citizen; most of her 80 acting credits came States-side. She worked steadily up through the 1940's; after which her work slowed. She only appeared on two television series during her career, the first in 1951 in the No will of His Own episode of the live "Lux Video Theatre" series on CBS; it was one of only six acting roles that she took during the entire decade (she appeared on the show again in 1953; she also had two appearances on The Donna Reed Show in the early 1960's).  She had just four acting roles in the 1960's and her last role came in 1973 in the Liv Ullmann comedy 40 Carats.  She then retired completely to her life in Beverly Hills, where she lived with her second husband, producer M. J. Frankovich, who was in fact the producer of 40 Carats.  She died in Beverly Hills on 27th of July in 1998 at the age of 95.  She is interred at Forest Lawn Memorial Park in Glendale in comic actor's Joe E. Brown family plot, along with her husband "Mike."