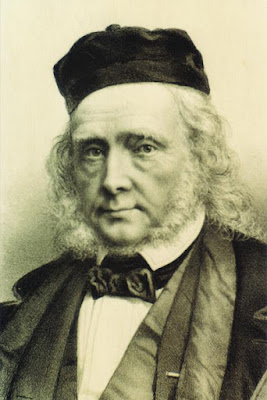 In the world of films, B.S. Ingemann is known as a songwriter, when he is known at all; in all other arena's of public knowledge he is known as a Danish author of novels and poetry.  Born Bernhard Severin Ingemann on this day on the island of Falster in the township of Torkilstrup, Ingeman began to write when he was a student at the University of Copenhagen.  His first published work dates from 1811 and was a book of poetry heavily influenced by German romantic writers. It was quickly followed by a volume two in 1812. By 1820, he had written and published a number of plays as well. In 1822, he was appointed instructor of language and literature at the Academy in Sorø, a city that would figure heavily in the rest of his life. He then began writing novels; and though they are categorized as "historical novels," they are notable for their consistent lack of accurate history--but he is regarded as the first Danish novelist to write in such a style.  Ingemann, the son of vicar who was completely absent from his life, was also a writer of hymns. This is what he is most well known for today. His name has some 35 soundtrack credits for both films and television attached--the most well known to date, the 2012 Mads Mikkelsen film The Hunt.  Obviously, his hymns used in soundtrack work are not what we are concerned with in regards to silent films. His first film credit dates from 1910 and it's the only credit to date from the silent era; and it was his prose that was first used in film as source material. The Danish drama Valdemar Sejr was adapted and directed by Danish film maker Gunnar Helsengreen; the film was based on one of Ingemann's novels.  To date, it is the only film screenplay to be based on any of his writings: novel, poetry or play.  Ingemann's music/hymns were first used in a film in 1939, in the Swedish production Her Little Majesty (Hennes lilla majestät).  They were likewise first used in a television production in 1970 in the Danish comedy series for family viewing "Huset på Christianshawn;" the most recent use of one of his hymns in any kind of production came just last year in the Danish television Christmas special DR's Store Julehow (2020).  Indeed, it his Christmas hymns that are not only a part of popular Danish culture, but recognizable by most, if not all.  Ingemann stayed in Sorø, along with his wife, Danish painter Lucie Mandix Ingeman, writing and teaching for the remainder of his life. He died there on the 24th of February in 1862 at the age of 72. He is buried in Sorø at the Sorø Klosterkirke.  His wife joined him there six years later.

Posted by Semetra Rhodes at 4:21 PM