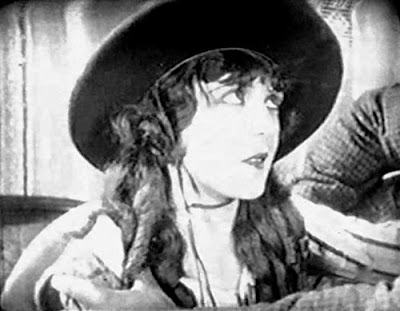 Born in what is now Muskogee, Oklahoma, western silent actress Alma Rayford was actually born in what was still then referred to as Muskogee, Indian Territory (people forget that Oklahoma has only been a state since 1907....).  Muskogee is the seat of Muskogee county and was the tribal seat of removed Mvsgoee (Creek) people; but by 1903, the city had gained a great deal of non-native population. I do not know if any part of Rayford's family had native connections to the town; that probability is about 50/50 and since not a great deal of biographical material on her is currently available, it's a toss up. But none-the-less, she was born there on this day in 1903; she was in films by the age of 18 when she was cast as "The Girl" in Hearts o' the Range in 1921. It was an independent western shot in Long Beach, California; so somehow, at that young age, she had made it from her birth place all the way to the west coast. She is listed as having the female lead in another independent western in 1922, The Lone Rider, but it is the 1924 film Smoking Trails that usually starts out most filmographies of her work (the film also features an Adrian Rayford, who, from a search of census records of all things, I am pretty sure was her younger sister, it was her only film role).  Alma was in a total of six films that year (one of which, The Terror of Pueblo, is not listed in the IMDb). Her serial work began in 1925, when she appeared in some of the "Cyclone Bob" films produced by Larry Wheeler Productions.  Later in the year she took the female lead in Cactus Trails opposite Jack Perrin, it was an western romantic action film produced and directed by Harry S. Webb and his namesake production company.  She next appeared opposite Ken Maynard (a former Buffalo Bill Wild West performer) in an early "western horror" Haunted Range (January 1926--it was also known as The Haunted Ranch or The Haunted House). She was also cast some of a series of features in the "Buffalo Bill Jr." films starting with the female lead in Trumpin Trouble in 1926. The year would prove to be her most prolific and saw her in several "character" features that sported specific cowboy roles that were well known to consumers of b-westerns (some of the character names were more well known than were the name's of the actors who portrayed them).  She finished the year in a Yakima Canutt feature, an A-grade western, The Outlaw Breaker. Rayford was a first rate rider and her appearing in such an active role in one of the great western riders of the time, Canutt, is testament to her horse riding skills for sure. Al Hoxie, a western star himself, proclaimed her to be on the of the best riders working in westerns in the mid-1920's--hands down.  In 1927, she had just two roles in features, both opposite real cowboy Buddy Roosevelt; and just a further two features the following year, one of which was the FBO production Young Whirlwind (1928). Her last film of the decade came in one of the several short films that she had sprinkled throughout her relatively short career. The Border Wolf (November 1929) was a twenty minute long 2-reeler produced by Universal in a series of short films about the Canadian Mounties. Though it marked her last film of the 1920's, it was also her first appearance in a film with sound and was a full talkie. She only appeared in two films after this, one role going uncredited. Her only major talking part came in the poverty row film Lightning Bill in 1934, an all talking "Buffalo Bill Jr." series picture. She retired from films and it appears that her family stayed in the Los Angeles area for some time to come (the 1940 census has them there); at some point she came to live in Texas. She died in El Paso on Valentine's Day in 1987 at the age of 83. Considering that so little is known about her life after pictures, it is not a surprise that he interment is not listed anywhere as of now.

Posted by Semetra Rhodes at 9:49 PM