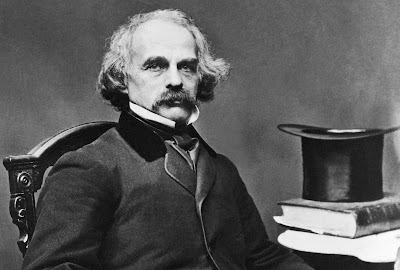 Fitting for the 4th of July, American gothic writer Nathaniel Hawthorne--birth sir name spelled Hathorne-- was born on this day in Salem, Massachusetts. A direct ancestor of his, John Hathorne, was one of the judges in the infamous Salem Witch Trials, and the only one to have not publicly--or privately that we know of--repent his involvement (read more about him here).  It was because of this that Nathaniel decided to add the "w" to his last name in his twenties to actively disassociate himself from his family history and he was fully intending to soon become a published author; which he accomplished in the year 1828.  There is little point trailing through his literary career, when there are far better sources for that than my writing (see links below). Suffice to say, that his name has laid claim, through other legendary American writers, to "best American novelist;" however, I will point out that Poe--that other master of dark romanticism--though complimentary of Hawthorne's "tone," leveled dislike of his style in his professional criticism, and form and even accused him (more than once) of plagiarism. Getting right down to the films, the first film made from his work came in 1908, and was made from arguably his most famous novel The Scarlet Letter, the film--the details of which can be found here--was made by Kalem and directed by Sidney Olcott.  To this day, The Scarlet Letter, remains the work that has been filmed far more than any of his other works.  During the silent era, 17 films were made from his work; other principle works included The House of the Seven Gables (1910)--made by Edison and directed by J. Searle Dawley; Feathertop (1912)--made by Eclair American and starring Muriel Ostriche; The New Adam and Eve (1915)--made by Gaumont and directed by Richard Garrick; Il Fauno of marmo (1920)-- the first foreign film of his work, produced in Italy and made by Celio Film based on his short story "The Marble Faun."  Predictably, the last silent film of his work was, yes, The Scarlet Letter in 1926. This was a major production (and the work has been restored at least once), it was directed by Victor Sjöström (as Victor Seastrom) and stars Lillian Gish. The novel was also the first of his works to get the sound treatment, funnily enough in a "poverty row" film in 1934 directed by Robert Vignola; the film wound up being the final film performance of star of silent screen Colleen Moore.  His work first made it on to television in 1949, when his work The House of the Seven Gables was performed live during a performance on The Philco Television Playhouse.  The Scarlet Letter joined it a year later in a performance on Studio One in Hollywood.  Over the years since, a few films based on his works have truly become classics. Famously, his Twice Told Tales got the horror treatment in 1963 in a film starring Vincent Price (Price had appeared in another adaptation of Hawthorne's The House of the Seven Gables in 1940). Probably the most famous film adapted from his work came in 1995 with the Roland Joffé directed The Scarlet Letter, starring Demi Moore and Gary Oldman.  And, to date The House of the Seven Gables (2018) is the most recent film made from his work; it is a short animated film, directed and adapted by Ben Wickey. Hawthorne himself did not make it to his 60th birthday. He had complained of some very painful stomach ailment, which only got worse with time. It was never properly diagnosed, so of what he actually died of will remain a mystery.  Whatever the ailment, it was with him for some time and curtailed his writing career by several years. Hawthorne actually died in his sleep while on a "recuperative trip" in the White Mountains of New Hampshire, near Plymouth on the 19th of May. He was buried in Sleepy Hollow Cemetery in Concord, MA on what is now known as "Author's Ridge" (note: this is not the same cemetery famously associated with Washington Irving, which is located in New York state). Hawthorne's pallbearers included Ralph Waldo Emerson, Henry Wadsworth Longfellow and Oliver Wendell Holmes Sr. Hawthorne was 59 years old at the time of this death. An early daguerrotype of Hawthorne in 1848. 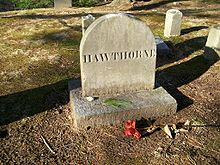 Find A Grave entry
Posted by Semetra Rhodes at 10:46 PM