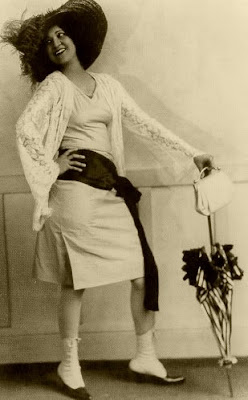 Very important and pioneering African American actress Evelyn Preer was born Evelyn Jarvis on this day in Vicksburg, Mississippi. When her father died suddenly, her mother moved her and her siblings to Chicago; she was young enough at the time to attend grammar school in the city. Her mother also introduced her to "street preaching"--which in turn introduced her, inadvertently, to street theater--and then on to vaudeville. So after graduating from high school, and already bitten by the acting bug, she went into the field as a profession; despite some family misgivings about it, she prevailed in joining a vaudeville company.  She toured extensively on what was known as the "chitlin circuit" in segregated black America in various vaudeville shows--this would eventually lead her all the way to Broadway in a colored performance of Salome in 1923 (she acted with a movie cohort of hers Laura Bowman). Preer's last name came from her first marriage to Frank Preer, who tragically died in 1923. Evelyn married fellow actor  Edward Thompson the following year, but kept her first married surname.  They met while working together at the Lafayette Theater in Chicago--an extremely important theater group for the advancement of African American acting.  Preer made history in 1919, when she accepted the leading female role of Orlean in Oscar Micheaux's directorial debut The Homesteader; it is the very first feature length film made by a black director with an all black cast (it is also notable, due to Micheaux having adapted his own novel for the screen). It is a stinking shame that it is a now lost to us.  In fact, of her nearly 20 film roles, more than half of them are believed lost.  From then on, whenever she appeared in the Micheaux film, he made her the star; although after 1920, her appearances in front of his camera were fewer and further apart due to her stage work. The last Micheaux film that she appeared in was The Spider's Web, starring opposite Lorenzo McClane (with whom she almost shared a birthday).  Her appearance in the film also marked the last time that she was in a silent film.  She next acted in a number of early talking shorts, all of them produced in 1929 and all of them made by the Christie Film Company, a division of Paramount. These were part of a greater project at Al Christie's company to make shorts that would compete with other similar comedic talking short films that were fairly numerous in the late 1920's. What is really interesting is that this was a major studio making films with all black casts and with stories that did not stereotype them; some may say that's rare now, it was all but unheard of in the 1920's! The other thing that all of these shorts had in common was the casting of her husband in them as well.  The first of these was The Melancholy Dame; and it marked the first time that Preer was directed in film by someone other than Micheaux, in this case Arvid E. Gillstrom (I have provided a full list of links below to these important films).  The other director that worked on these films was William Watson and at least one of them featured the acting of Sam McDaniel, brother of Hattie McDaniel with first African American woman to win an Academy Award.  The first film of the new decade to feature her acting was the full musical:  Georgia Rose.  The film, which was written and directed by Harry A. Grant, was made for Arista Pictures and released in September of 1930 (it is among the list of the lost unfortunately).  Her last three roles came in major motion pictures, though she was only credited in one: Good Sport (1931) a romantic comedy, Ladies of the Big House (1931) a Sylvia Sidney picture in which she plays an inmate and Josef von Sternberg's Blonde Venus (1932).  Preer was also an accomplished blues and jazz singer and twice contributed performances to films (along with her musical performance in Rose mentioned above). She also performed live with musical artists and recorded music--one of her musical collaborators early on was Duke Ellington. Preer had an ascendant career in front of her and she had motherhood to look forward to as well, but she developed post-partum complications about two weeks after giving birth to her daughter Edeve and eventually succumbed to double pneumonia in Los Angeles on the 17th of November at the just the age of 36.  She was cremated and her ashes were kept by family. Her husband continued to act in film during the 30's and 40's; and her daughter converted to Roman Catholicism, became a nun and university professor teaching African American cinema. During her lifetime, Preer's most important working relationship was no doubt with the powerhouse that Anita Bush. By far her most well known film performance came in Oscar Michaeux's Within Our Gates--which I am so happy to say is not only still with us, it is so widely available that as of this writing, it is available to stream on Amazon Prime.

[Note: about half the sources on her birth have her birth date on the 16th of July, after doing some additional research this week, I believer that her birthday was indeed the 26th of July instead] 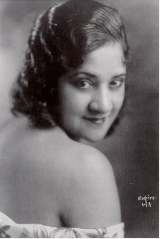 The Framing Of The Shrew

Oft In The Silly Night

Posted by Semetra Rhodes at 8:56 PM