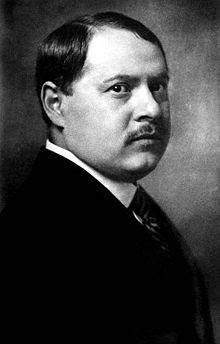 Hungarian born composer and Broadway music editor Albert Szirmai was born on this day in Budapest in the Austria-Hungary Empire. Sometimes credited as "Albert Sirmay," he was primarily a composer of operas/operettas and scored just as many musical plays. Though born in Budapest, he was completely devoted to early American musical stage composition and greatly admired 20th century songsters like George Gershwin and Cole Porter (in fact, Szirmai made headlines and history, when, in 1965, he discovered some 100 songs here-for-to-unknown written by Porter shortly after his death). He was also a big admirer of Gilbert and Sullivan; and took inspiration from German classical romantics composers and his native Hungarian folk songs. Szirmai arrived in the United States via the New York port in 1923; after working from the early part of the 20th century as a conductor in Hungary. When he arrived, he already had two film compositions to his name--strange I know for the silent era, but his work was used specifically to accompany two films in Hungary--the first of which was Kruppka Endre's Gazdag ember kabátja in 1912.   The same can be said for the 1916 Korda Sándor (Alexander Korda) film Mágnás Miska.  These are the only two films that he had anything to do with in the silent era. His work next turns up in the 1935 Vitaphone comedic short Vitaphone Casino starring Buster West.  Though his work in American cinema mostly dates from the 1930's (and confined to musical shorts), his work was rediscovered at various points in time in his home country of Hungary. In fact, the most recent use of one of his operatic pieces dates from the 1996 Hungarian comedy Szamba, which sports a soundtrack exclusively comprised of Hungarian composers.  In the 1940's, he also collaborated at least once with Kurt Weill.  Szimai died in his adopted home town of New York City on the 15th of January at the age of 86.  I can find no burial information on him under any name that he used in life.  Toward the end of his life, he made one final trip back to Hungary; while there he successfully premiered two new works. 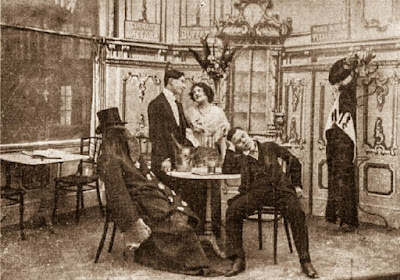 A still from Gazdag Ember Kabátja (1912)

Posted by Semetra Rhodes at 1:41 PM