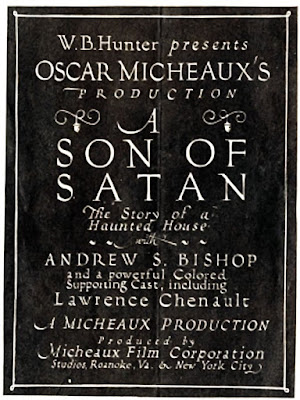 Another actor working with director/writer Oscar Micheaux's group of film makers in the 1920's, African American actor William Crowell (not to be confused with the actor from the 1930's with the same name) was born William Benjamin Franklin Crowell on this day in Asheville, North Carolina. Crowell did not start his acting career with Micheaux, but when he went to work for him, he was in more of the business end of Micheaux's production company.  Mr. Crowell's first credit comes in an Arch Heath film Beyond the Great Wall in 1920; the film was also marketed as House of Darkened Windows. All of his other four film credits that have come down to us are related to Micheaux productions. His first direction by Micheaux came in 1922 in a take on the Bluebeard story, presented as domestic melodrama in The Dungeon. All of the other films that he acted in were also directed by Micheaux, save one that is a bit on the strange side.  Ghost of Tolston's Manor, released in 1923, was most likely also directed by Micheaux, but I looked it up in my handy Horror in Silent Film guide by Roy Kinnard and, though he attributes the film to the Micheaux Film company, he had Japanese director Keisuke Kinoshita down as helming the project and list Japanese actors as the cast. This is most likely just a mistake, but a weird one to be sure, as Kinoshita never made a silent film; he first directed a film in 1943. It is really no big deal, just one of those oddities that one encounters from time to time tooling about in the world of silent cinema. The last film that Crowell appeared in was The House Behind the Cedars in 1927, starring Shingzie Howard, who was largely a replacement actress for such roles after the departure of Evelyn Preer.  A United States Army veteran of the Spanish American war (rank of Corporal), Crowell held a lot of different jobs in his lifetime, including an insurance agent; but it was his job(s) with Micheaux Film that he held the longest and brought him the most success. In a addition to working as an actor, he was--most importantly--Vice President of the company, and probably should have been credited multiple times as a producer as well.  Crowell died suddenly on the 30th of July from heat exhaustion/heat stroke, just ten days after his 52nd birthday. I can find no information as to his burial, though he is listed as dying in Roanoke, Virginia. He was variously credited as W.F.B. Crowell and William B.F. Crowell in his acting roles. 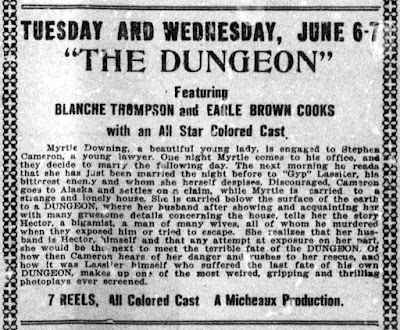 Posted by Semetra Rhodes at 3:48 PM

Email ThisBlogThis!Share to TwitterShare to FacebookShare to Pinterest
Labels: Beyond The Great Wall (1920), Black Actors, Born Today, Ghost Of Tolston's Manor (1923), Oscar Micheaux, The Dungeon (1922), The House Behind The Cedars (1, William Crowell