Lorenzo McClane was an African American actor who was part of the greater group of people involved with Oscar Micheaux's production house Micheaux Film. We are fortunate to know many more of the details of his life than a large number of other players involved with the making of "colored films" in the silent and early sound era.  Born Alphonso Lorenzo McClane in Washington D.C. on this day (I am wondering if he was part of the mixed community that gave us James Young [aka James Young Deer]), he was married with two children during his lifetime.  His only appearance that is recorded in a silent film comes in Micheaux's "crime horror" of 1927--shot in late 1926 in Baltimore--The Spider's Web (Micheaux remade the film in 1932 as The Girl From Chicago).  McClane was the male lead opposite Evelyn Preer. It is such a shame that so many of these films had little chance of survival. If one thinks about how few "big studio" silents have survived for various reasons, I personally think it's a near miracle that any of Micheaux's films have been preserved. So it is important that the other appearance that McClane made in film was a 1935 Michaeux Film production Murder In Harlem has survived. Shot in Fort Lee, New Jersey--where Micheaux was based until 1948--this is our one moment to see McClane in action. Unlike in The Spider's Web, he was in a lesser, though named, role--that of Arthur Vance (many roles in the film are "undetermined" due to incomplete records).  It is probable that McClane appeared in other films, but the extreme restrictions on black film actors choices (extreme prejudice in the north, Jim Crow in the south) at the time mean it is possible that these are his only film roles (I don't think that's likely though). We do know through records that McClane passed in January of 1975 in Teaneck, New Jersey.  Apparently he hadn't moved far from Fort Lee after his relocation there in the late 1920's or early 1930's. Teaneck is an adjacent township to the northwest of Fort Lee (present day 1-80 expressway runs through the southern edge). There presently is no information as to his burial. 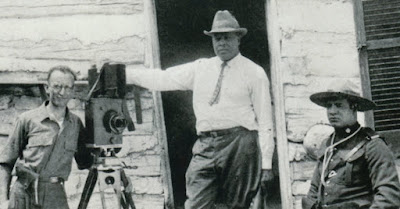 Micheaux on the set

[Apologies for the tardy posting, I've been having computer trouble with Google interaction with my Mac of late]