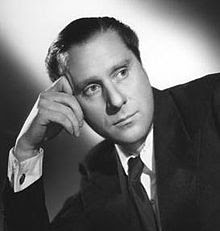 British director Sir Carol Reed was born on this day in Putney to Beatrice May Pinney who later took the surname of "Reed." She was the mistress of English director/actor Sir Herbert Beerbohn Tree and Carol was their illegitimate child.  Despite the circumstances of his birth, he was afforded a first rate education at The King's School, located in Canterbury. It was here that he developed a personal interest in acting; and here that he began acting in his late teens. He got involved in the theatrical company associated with British pulp writer of mystery/crime/horror novels Edgar Wallace; the two had two things in common: a family background in the acting business and illegitimate birth.  Reed would eventually become Wallace's assistant in the late 1920's and would become an actor in films produced from Wallace's work. His film debut in 1929, and a turn in a Wallace film from 1930, are the reason why this legendary director has a write up here.  He made an appearance in The Flying Squad a detective story based on a Wallace novel, and was released in January of 1929. The film was directed by Arthur Maude, was fully silent and made for British Lion Film Corporation; Reed appeared as one of the "offenders," along with Bryan Edgar Wallace, son of the elder Wallace.  Reed also made a small appearance in Red Aces in 1930, another Wallace adaptation; except that Wallace himself adapted his own play for the film screen, and directed the film himself. It is also an example of a rare silent British film after 1929. These two bit parts comprise all there was of Reed's "acting career" (not counting of course his providing the opening narration for the British version of The Third Man).  He would go on to have a brilliant directing career, first taking up the seat in 1935 with the sea adventure Midshipman Easy (he is uncredited for directing work done on It Happened in Paris (1935)). He would direct a number names well known to us today, including David Niven, Robert Donat, Michael Redgrave and James Mason; but it was his direction of Joseph Cotten and Alida Valli (and Orson Welles) in Graham Greene's The Third Man for which he is still famous today.  He would go to direct a number of films that are well known, but none has been more consistently associated with his name as the 1949 film noir.  His last film was The Public Eye starring Mia Farrow and released in July of 1972.  Reed died of a heart attack four years later on the 25th of April 1976 at the age of 69.  Reed was a three time Oscar nominee for Best Director (including for The Third Man), winning once for his direction of the musical Oliver! in 1968 (the film would sweep the 1969 Oscars). He was also the uncle of late actor Oliver Reed, who he directed in Oliver!.  He was also just the second film director, and the first native born British director, to be knighted (the first was Alexander Korda).  He is buried at Gunnersbury Cemetery (also known as (New) Kensington Cemetery), a relatively new cemetery in Greater London in the borough of Ealing.

Posted by Semetra Rhodes at 7:04 PM